This afternoon we 3 kids decided to traipse off to the ol' park in our neighborhood. It is way too pretty outside to not take advantage of it with a little bike riding. Charlotte brought along her camera, so here are some "memories." :P

Charlotte went around the entire pond taking pictures of gorgeous flowers, water, birds, etc. I thought I'd poke fun at her just a tad, so I took this ultra-focused and beautiful picture of pollution. :D 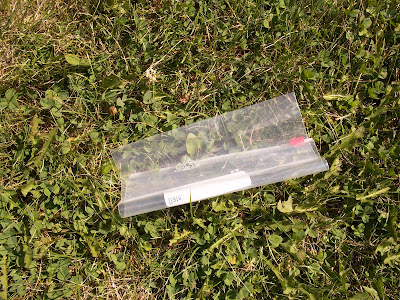 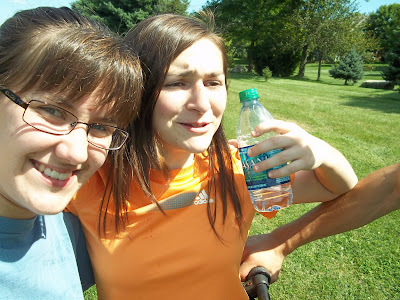 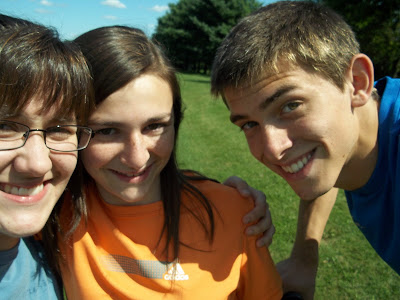 You know who we are. 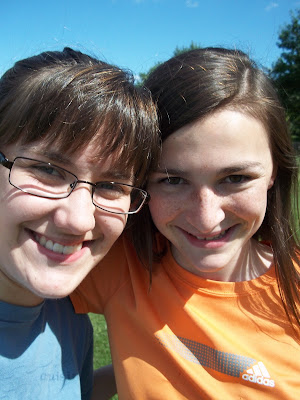 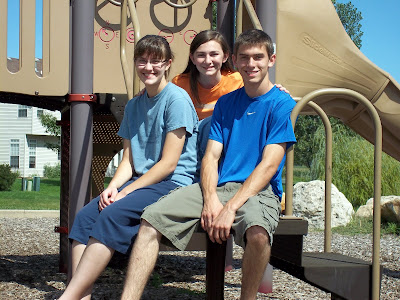 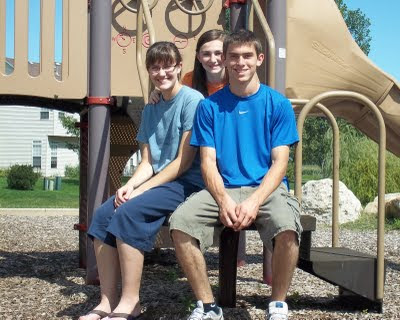 Today God impressed upon me how much He delights in giving His children strength.

I have been rather overwhelmed with life lately: college, my best friends' leaving, figuring out how exactly to teach violin, etc. Makes me crazy. I struggle to surrender things to God in prayer, and embrace the peace that passes all understanding. I was completely exhausted last night. Very tired and emotional. I cried. A lot. I was very discouraged about multiple things and felt I couldn't handle it at all. Of course, thinking over big-deal issues at midnight is not the wisest thing to do. ;)

Anyway, this morning God gave me total energy to "seize the day," if you will. I felt rested and calm. I listened to an entire CD of sacred string/piano arrangements during the drive there - focusing on the words of the hymns. While I waited in the lobby before class, I listened to some Soundforth numbers about God's peace and protection. Both classes whooshed by, and soon I was on my way home. I listened to a Christmas cantata this time. I tried to sing along even if I didn't know the words. Found out pretty quick I can hardly drive and sing at the same time!! ;D (I'm just challenged. That's all there is to it.) Anyway, I list all the music I listened to to say that Christian music has power to affect the way you are viewing things and thinking about God. It gave me a great peace today to sing songs that magnify God's character and stability and omnipotence.

Today is a gorgeous day. Cool, sunny, breezy even. God has given it to me. I have WAY more than I ever deserved. I can be sure that God will never leave me, and His strength is made perfect {complete} in weakness. How I should thank Him again and again for that!! :)

Well, I know this probably was not worded exactly clearly. I'm rushing out to teach two violin lessons now. I just wanted to share this testimony today. "Weeping may endure for a night, but joy cometh in the morning." Thankful to God for His joy! :)
Posted by Rachael Marsceau at 12:41 PM No comments:

Two of my very best friends are leaving for college within the month. We decided to take some "goodbye pics" tonight at church. This is kinda sad and yet kinda exciting too. :) 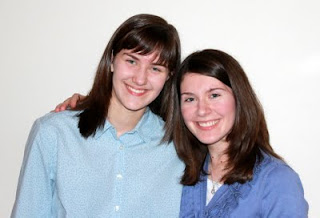 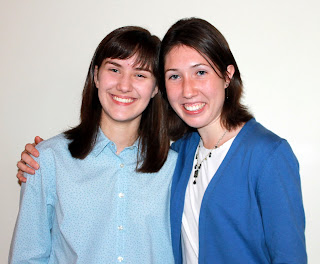 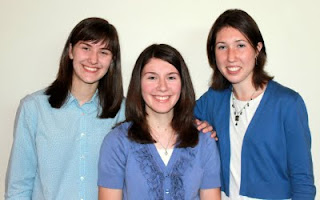 Best friends for roughly 18 years. I love you guys and am praying for you! :)
Posted by Rachael Marsceau at 10:01 PM No comments: 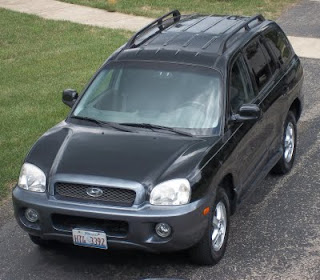 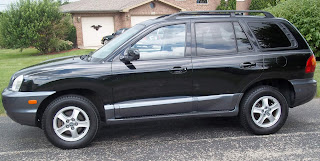 I was able to wake up a tad later for Day 2 of workshops and rehearsals. :) The day began with Patch the Pirate leading his crew in several songs. I completely got choked up when he and a little girl sang "Cherish the Moment." Man. It just kind of poked my heart in a tender spot. Anyway, the Patch Club demonstration was followed by morning chapel and then our first class.

I chose to observe Rachelle Whitcomb's string masterclass. A violist played, a trio played, and a violinist played. I enjoyed hearing Rachelle give tips on getting good tone, fixing bowholds, emphasizing melody notes, etc. (It was also fun to watch Christiane Emory accompany.)

After another session with Mr. Schettler, we went to lunch. We chose to go to CiCi's, which was where the Duggars, Bateses, and Paynes all decided to go too. :P I wonder what the "outsider" CiCi's customers thought of the million girls walking around with long hair and long skirts. :P We all outnumbered them! :)

When we got back, we once again split up to go to various workshops. I went to Jean Cook's "Keys to Creativity," in which she discussed ideas for teaching piano, both in a private setting or group class. This was a very helpful class as I got numerous ideas for repertoire books as well as student motivation.

This was followed by an hour-long choir/orchestra rehearsal. I cannot explain how much I enjoy playing in a full (or close-to-full :P) orchestra! We played with one of the choir numbers, so that feeling of soaring orchestra and piano accompaniment behind hundreds of singers is magnificent! (Not to mention being conducted by Warren Cook who is amazing!) I wish I could do this every week.

Anyway, my very last workshop was observing Ray Gibbs's vocal masterclass. Jason Hamilton was the very first "victim," as Mr. Gibbs called it. It was neat to hear him sing a solo. :) Mr. Gibbs is such a sweet teacher, and some of the teaching tips he gave participants worked so well we all just sat there practically gasping! :P It's evident he loves to help students sing better for the glory of God. He was always mentioning how, for the Christian, the words are the most important thing, and we must therefore make sure those are extremely clear to the listener. The message must be communicated.

We all gathered in the auditorium for some hymn-singing and a challenge. Then we quickly ate dinner, came back and changed for the concert, tuned, and got seated on the platform for the concert. I wasn't sure how many people would show up for the Majesty Musicollege concert, but the auditorium filled up...and filled up some more...and continued to fill until it was hard to find empty seats. The entire concert went so well. The choir sang about 3 or 4 songs, and one of them was the one the orchestra played along with. The orchestra also played the prelude. Jim Schettler gave a message, Gary Emory made announcements, and Rachelle, Shelly, Christiane, and Jean played the offertory.

I was so glad we decided to go to this, even though it was last-minute! It's amazing that for two days you can go and get college-level classes from amazing faculty, and use these tips to further your music ministry for the Lord. I thoroughly enjoyed observing people, playing and singing, and hearing amazing preaching out of the Word of God. Looking forward to going again! :)
Posted by Rachael Marsceau at 10:32 AM No comments:

Yes, I went on ANOTHER trip. :P My mom, myself, and my two friends Bethany and Rebecca drove up to Indianapolis Sunday night for the 2011 Majesty Musicollege held at Burge Terrace Baptist Church. We got to our hotel quite late. Let me just say this: it ALWAYS pays to get a nice hotel. :) It was comfy and completely smoke-free and nicely decorated.

The first day began with orientation and then a chapel session with the Musicollege speaker, Jim Schettler. Wow. He is SO excellent! All of his messages were so rich and well-illustrated. Very, very applicable to all of our lives. It was a privilege hearing him these two days.

I then went to a class called "String Strategies" taught by Rachelle Whitcomb (used-to-be Emory). She shared teaching tips in the hour we had with her. Several I had already heard at the Suzuki training, but a few ideas were new and I loved hearing her teach. She's very sweet. ;)

After that, we had another brief session with Mr. Schettler and then went out for lunch. I had not been to Fazoli's in a LONG time, so I didn't remember how delicious it was. (And all-you-can-eat breadsticks????? I'll take it!)

My next-to-last workshop of the day was Shelly Hamilton's "Exciting Congregational Playing" in which she gave about 8 different "fill-in" options to kind of spice up your accompaniment to the congregation. This was a much-needed class for me, and I now have several different ideas to play around with in my practice. (Yeah yeah. "Play around." I got it. :P)

We then had a full choir rehearsal where we read through lots of new music and listened to clips of CDs. And then I went to the last class of the day: Jean Cook's "Panic-Free Performing." I had gone to this one last year, but I went again this year because she is SO. FUNNY. :D She is SUCH a fun person who really gets you engaged as she's teaching. I don't really know how she ended up with Warren Cook as a husband, but people have so many random stories of how they got together, so.... :P

The day ended with another brief message by Jim Schettler, and then a 2-hour rehearsal for orchestra and choir. Bethany and I were stand partners. :) I sat right next to a girl I went to BJU Junior Music Camp with about 6 years ago! :) It's a SMALL world. She was there with her sister. They go to the same church my SD friends used to go to, and they had come with two friends I also sorta kinda knew through friends: the Dubs girls. Always fun to see people from "way back." :)

So, there's Day 1. Sorry it's not very interesting to read. The days are very busy as they cram as much as they can into 24 hrs., so you often don't even have time to think about details. Day 2 will be another post, of course. :P
Posted by Rachael Marsceau at 9:52 AM 1 comment:

Today our quartet was once again honored to play at Jared's Galleria of Jewelry in Orland Park. This time we had a 3-hour time slot. Yeah. It actually felt shorter than I thought it would, but we did go through all our music twice before finishing. :) I am always amazed at the amounts of money people have and are willing to spend on pretty, shiny things to put in your ears, on your fingers, around your neck, etc. I was a good girl and spent only $7,000 today...in my mind, of course. ;) Here are some rings I wanted: 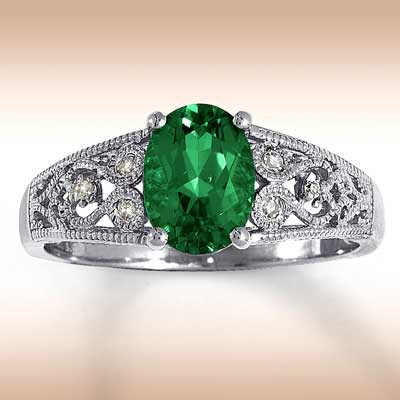 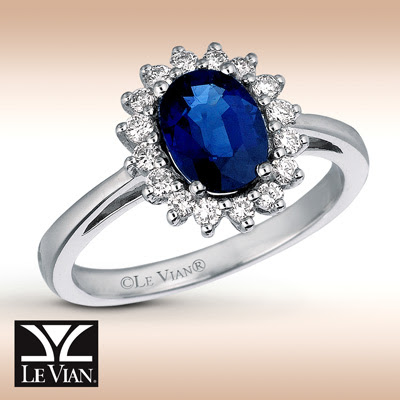 Tell me if you like them or not. :P It is my tradition to wear my $10 treble clef necklace to this gig, and today I also got to wear a tad of my favorite perfume since Mom didn't have to drive me. :) Anyway, getting to see a cushion cut diamond, as well as getting to try on a gorgeous Alexandrite ring, AND having it be a paying gig makes me a happy camper. :)
Posted by Rachael Marsceau at 4:28 PM 4 comments: